http://www.blogger.com/template-edit.g?blogID=27684744 ARTYFACTS: Art is in the house - House for an Art Lover – Glasgow

Art is in the house - House for an Art Lover – Glasgow

As a teenager I came to this part of Glasgow dozens of times, year after year, to watch Glasgow Rangers play at Ibrox. I was there when 66 people died on an exit stair, after Rangers scored a last minute goal and people tried to re-enter the stadium, literally, having come down that same stair a few minutes earlier. There were empty seats on the bus on the way home. We were that close to death.
If you had asked me then if I would be visiting a ‘House for an Art Lover’, a Charles Rennie Macintosh building, I would have scoffed and replied ‘Are ye daft?’. But here I am over 40 years later, across the road at that very building. People change.

It’s a winter’s day and there’s enough grey sky, wasteland and empty buildings to make your yearn for something of beauty. The satnav had already been rendered useless by Glasgow’s celtic broach pattern of motorways and slip-roads but there was no mistaking the white and brown edifice in the park. This is no ordinary shape, not a trace of neo-classical, gothic or baroque forms - too odd, too asymmetric.
House IS a work of art 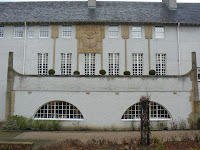 We stopped on the south side and the first thing you see is the yellowish sandstone decoration. And rows of windows with those characteristic Macintosh small, square windows. This is Glasgow, so there’s a need for windows, and many curved, like the bowed window on the right, to light up the room inside. The back terrace, with its corner pillars and two upturned bowl windows like eyes, tell you that modernism is in the house.  It reminded me of his Scotland Street school, which has a similar structure. What an outstanding idea, to simply add vertical stalks with rectilinear reliefs just below the eaves, to hold the thing together, so that the whole wall is a tableaux, but still that cheeky asymmetry.
This is the back of the house but it tells you immediately that this IS the house of an art lover. It does not contain works of art, it is not just art as interior design, IS a work of art. 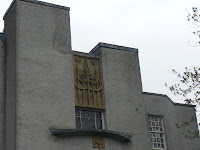 Walk to the east side and symmetry gives way to asymmetry with a half-tower flanked by two different sized square towers. The thing about this house is the disregard for unity on the outside, The back, sides and front are radically different forms. But always held together by sandstone reliefs. It's a castle of art. 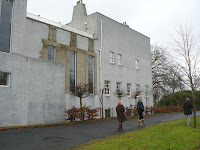 Round the front, there’s more of that sandstone relief work a set of tall windows set in a sandstone panel. The entrance draws on traditional fortified house architecture with a small, defensive, L-shaped front entrance. Top marks to the young man on the door. He was enthusiastic and informative, unlike the audio guide that truly put the 'tosh' in Macintosh. Academics with useless, long winded, personal anecdotes and trite commentary. It was like listening to a series of bad undergraduate essays. Listen up - brevity is a virtue.
Japanese atrium 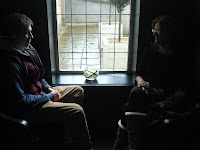 Then, into the atrium, with its Japanese inspired black balcony, set upon dark pillars. Tall sets of windows allow light to flood in onto metal and glass wall artworks. It’s like entering a broch, castle or fortified house. This is my son and wife, Vermeer-like, in the cubby seats.The dark wood on the northern side is in contrast with the white rooms on the south. This contrast is a recurring Macintosh theme. With Macintosh you expect, light, creamy white interiors and subtle forms. Not here - this is a war room. 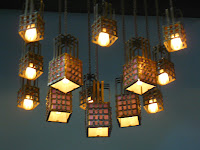 Look up and there’s clusters of orange lights in black metal lanterns. They work perfectly in this space. Macintosh loved lighting. This was the era when electric lighting was replacing gas, and he designed the lights carefully for the intended ambiance of each room. This cluster is a Japanese inspired form with a hint of the Scottish castle grating. Art Nouveau often included vernacular design. In Riga, traditional Latvian themes, England arts and crafts, Brussels the terraced house, Prague Czech forms and here in Glasgow Scottish vernacular architecture, thistles and the Glasgow rose. 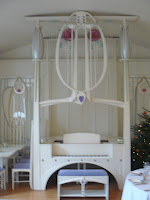 The dining room has a piano at one end surrounded by sexual imagery. Two women either side create vaginal shapes with their hand at their crotches and above the keyboard a huge Macintosh structure (for the initiated a penis being inserted). One of the most fascinating features of Macintosh and Macdonald’s art is its sexual imagery. At complete odds with Victorian values and Scottish Calvinism, the phallic and vaginal forms are everywhere in their work. This was more than an aesthetic break with the past, it was a change in values. 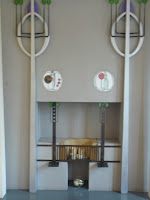 At the other end a fireplace that has literally set fire to Victorian clumsiness. It’s so completely modern that you barely recognise it as a fireplace.
The entire southern side is a wall of tall windows, with Margaret Macdonald tapestries. It was set for a wedding that day and what better place to start your wedded life than in the creation of two of Glasgow’s greatest artists. I liked the idea that they were being used and celebrated by the people of Glasgow eighty years after Macintosh’s death. What an ideal tribute for artists who were so keen to bring art into houses, schools and churches. Art that could be lived. 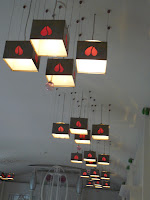 The lights in the dining room are the familiar, square Macintosh forms, with red glass insets. It’s like a roof of rubies. They're in two rows and flood white light downwards. 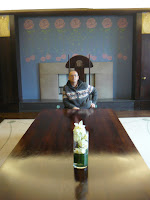 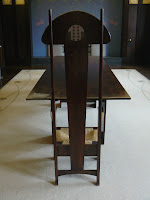 The two tall chairs and long table dominate the room. As they say, a Macintosh chair is always bolder than the person sitting in it. I was surprised, when the young guy who had sold us tickets entered and said ‘Feel free to sit on the chairs’, so we did. They were far more comfortable than they looked. Tall backs - what is that all about? These are power chairs. Chairs for important meetings. They force you to sit upright and rise above the back of your head. They make you look forward. Sit in one and you feel yourself rise in stature. To match this sense of in domitable spirit, tehre's a bold fireplace in grey stone that dominates the west wall. The long table is another, almost medieval statement. However, everywhere in this room are reliefs and stenciled detail. 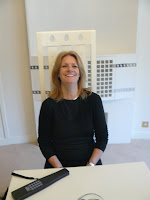 
Eastern room
A snug white oval room with four square chairs and two snug chairs. It’s infused with light from the large bowed window and billed as the ladies room. So here she is - Lady Clark. The formal  simplicity of the square table and four tall chairs is stunning. Once again, the oval light reflects the form and focus of the room.
Conclusion
Built from Charles Rennie Macintosh drawings for a competition for a German design magazine, the House for an Art Lover, was built in 1996. What a brilliant idea and great place to end the year, and spend some time with friends. We had a good lunch in the restaurant downstairs and headed off to Kelvingrove Art Gallery and Museum.
Kelvingrove Art Gallery and Museum 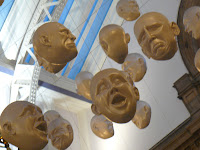 Great setting in the middle of a park but we’re in one of those Victorian Palaces that are all building and no intimacy or beauty. Maybe it’s because we’d just come from the House of the Art Lover, that it felt too grandiose, too big, too muddled. Even worse are the exhibits. It’s like wandering through a car boot sale from other Victorian art galleries and museums. It’s all stuffed animals and populist ‘Glaswegian’ themes.
We were here to see the Macintosh room in one wing, and that was passable as it had panels, reliefs and original Macintosh and Macdonald pieces. Plucked from their natural settings in houses, and cafes, they looked a little sad. Finally a walk through Glasgow at night, full of post-Christmas shoppers, lots of bustle and a great Italian at Sartos. Brilliant day.

It's a beautiful building and was a lovely initiative to build it to the original Macintosh plans. Macintosh is now synonymous with Glasgow, but during his life he didn't get the respect he deserved from the Glaswegians and retreated to France. It is also well worth visiting Hillhouse in Helensburgh - his finest domestic house - everything, including door handles, light fittings, decorative panels etc has been designed by Macintosh and his wife Margaret MacDonald.