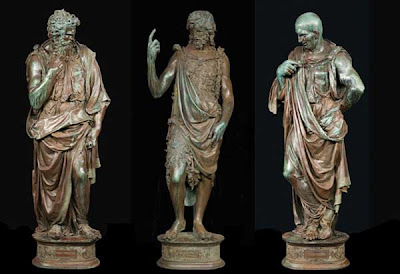 Remarkably roomy for Saturday morning blockbuster at the Royal Academy. I can only guess the usual crowd see anything other than painting as beneath them. Sure, the theme is a bit oblique - the use of a single metal (strictly speaking a range of copper-based alloys) in art, but with 5000 years of art, from many cultures, there’s nothing third rate about Bronzes.
The first piece, and arguably the finest, was a 3rd C BC Greek satyr, found in a shipwreck. The audacity of the sculptor, especially in that austere classical climate, is impressive. The figure flings himself forward, hair flying. This is the sort of Dionysian art that Nietzsche saw as the origin of great art itself, still free from cooler, Apollonian rationalism. So good old metal can produce remarkable lightness of touch and movement? Well maybe.
Next up was the ‘human figure’ room with a huge black copy of Cellini’s Perseus holding Medusa’s head, looking coolly down at her dead body. He’s a hero but a killer. Next to him are three colossal figures of John the Baptist, a Levantine and Pharisee by Rustici. The curiosity and scepticism of the figures is brilliantly executed in the poses and expressions. This is where things got interesting as the medium (bronze) starts to influence the art. These are fabulous sculptures but you feel that the metal does nothing to soften the concepts.
Where you want to show safe, solid status, such as the local bigwig Lucius Mammius Maximus, found in the ash that engulfed Herculaneum, the medium  is suitable austere. Look at me. I’m the man. Even Rodin’s figure, in its familiar dark brown, varnished patina, lacks lightness of being. Interesting to compare the bronze Lacoon in this show with the marble original (some think it’s a fake) in the Vatican Museum. You’d imagine that bronze would give it more life but it doesn’t. Marble enlivens the figures, bronze deadens and leadens the effect.
The Renaissance takes the classical tradition and puts its own Apollonian spin on bronze statuary. Even when Hercules is clubbing a centaur or Dionysius is sitting astride a panther, they are cool and restrained. It’s as if the cold metal forces a calm on the subject by keeping them frozen as objects. The problem is that the medium sometimes influences the message. In portraits, bronze is perhaps not as light as marble or stone in showing character and personality, apart from those hard-nosed bastards from history, such as the Bulgarian King, who looks like the psychopath he evidently was.
One room has a menagerie of animals with an astounding piece that completely dominates the room - a wild boar. It says it’s life size but this is one big boar. It sits there on its haunches and looks cute but again the beast seems tamed by the metal and lacks killer instincts.
The bronze inlaid table from Egypt looked too metallic and dense for its purpose. It was an expensive functional object that has lost touch with its use. The bronze Buddhas, far from annihilating the ego and reality confirm its physical reality. The Chinese seem to have avoided the use of bronze for figurative work and stuck to bells and vessels. In many ways this is a more honest use of bronze.
Take Jeff Koons basketball, tucked away but within hand’s reach it made you want to try to lift it. Koon uses the metal effect to good effect in making its matt blackness suggest weight. Jasper John’s Ballantyne beer cans were similarly rooted to the table. These guys know that a medium automatically infers qualities, separate from the work itself. Other modern pieces make the pieces look unintentionally heavy.
The one fabulous exception to my hypothesis is Remington’s masterpiece ‘Off the range’, four cowboys fly forward on their galloping horses. It’s four guys whooping it up at full pelt on their trusty steeds, shooting off their guns and leaning back and forward on their saddles. This is back to the Dionysian spirit that metal sculpture can inspire, as there’s no way this could have been made in marble. Only six of the sixteen horses legs are on the ground, the others suspended by the strength of the metallic structure. This is a man who saw that structurally, the strength of bronze could enhance his vision.
Metal fatigue
OK was anything missing? Sure, I’d have liked to have seen some bronze age axes, surely the real origin and rise of bronze objects was worthy of inclusion. I’d also liked to have seen more Greek masterpieces. But quibbles aside, there is a problem in just juxtaposition. A little expert exposition on why some cultures made full size, naked figures and others pots and bells would have been welcome. Each room and theme needed a little more relevant and enlightening explanation. Suffered from a little metal fatigue at the end but only because I spent so much time gawping.