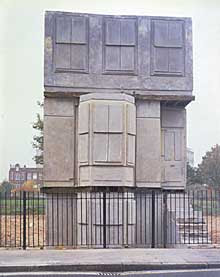 Heard about the unmade bed, shed/boat/shed, room with lights that go on and off, pickled cows and other Turner winners, here's a chance to see the 1984-2006 batch. In stark comparison with the Millais exhibition I attended on the same day, this was full of young people chatting, taking notes and smiling. All of these were absent in Millais, which was more of a National Trust crowd - lots of cut-glass accents, tweeds and supposedly, serious comment.

It's the range of media that surprises - beds, glass cases of formaldehyde, rooms, video, pots, paintings, lights, sculptures, moulded concrete. Who cares who won and in what year, the Turner has, quite simply, helped burst open the door to new ideas, as well as stimulate debate on what constitutes art. It's got to be better than the annual party political conferences, debate on the future of A-levels and so on.

Of course, it's the body of work is what counts and it's great to wander round a show where you never see anything that is like anything else.

We have Tomma Abts, who must have given the most boring acceptance speech in the history of the prize, and some claim the most boring paintings. Personally, I've come to enjoy the restraint in her scale, composition and use of colour. Less is more. 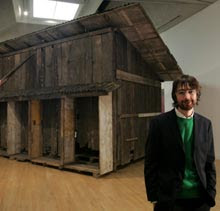 d come boat come shed is just wonderfully wacky and all about identity and time. Remember that this work was a real act in time. he did build the boat from the shed, sail it down the Rhine and rebuild it. It was a performance.

Jeremy Deller's room was a mite predictable and the fact that the critics and judges were as one on the decision probably means it was trite.

Grayson Perry I loved. Where else would a transvestite (alter-ego Claire) w 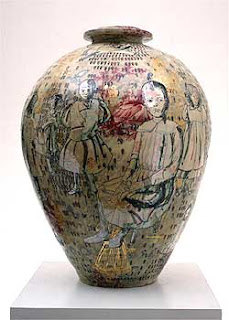 ho does beautiful ceramics with worrying slogans and images, beat the Chapman Brothers to the finishing line. How extraordinary. It's a tribute to the UK that we regarded this as a good choice. The pots just blow you away. Who wouldn't want to own these and have them somewhere you could see them every day.

Keith Tyson doesn't do it for me as I don't find the sloganeering even remotely enlightening. I agreed with Kim Howells, the Minister for Culture who signed the book "If this is the best that British artists can produce, the Bristish art is lost. it is cold, mechanical bullshit.." He was right on this but wrong in his general assumption. British art proved to be alive and kicking.

Martin Creed's lights going on and off was not enough to carry this work forward and it seems rather tame now. Time weeds out this sort of stuff.

Wolfgang Tillmans photographs put this medium on the stage but it didn't do much for me. There were are other much better photographers around. then there was the point about him not being a British artist - they had a point. 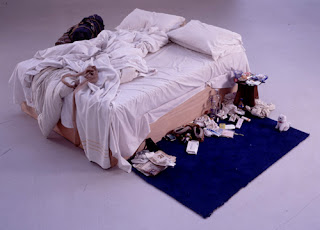 Tracy Emin's bed Britain's worst nightmare but it didn't win. Steve McQueen's video of the shed wall falling repeatedly, from many angles, onto a standing man, was compelling. A Chaplinesque trick turned into a rivetting film.

Chris Ofili's pictures do absolutely nothing for me. They seem like images created for tourists to reflect sime imaginary 'local culture' or tat sold in those 'imported from the east' shops. 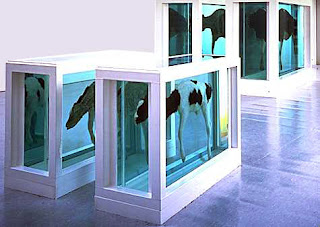 plit some cows as well as public opinion right down the middle. Animal Rights protesters were not pleased, neither were the cows. This was 11 years ago - how time flies.

Anthony Gormley's rusted figures wanted to escape from the room. The Angel of the North and recent Hayward ehibition showed the long-term wisdom of this choice.

Rachel Whiteread's House is my favourite 90's work of art. It buried into heart, mind, memories, sense of space, sense of time and unless you had been a homeless nomad for the whole of your life, the whole heimat thing. Astonishing.

Anish Kapoor's three blue hemispheres demand that you stand there and soak in the experience. Of course, the 'experience' is that of the mind turning in on itselfas your peripheral vision is flooded by dark blue light. It's like travelling to space - cold, quite and deeply worrying.

Richard Long has his limits. He's locked himself into a world of rocks and mud which now holds him back. this was obvious in his recent Edinburgh retrospective.

Gilbert and George have never appealed with their staged, foppish posing. They'e as revolutionary as Coronation Street.

1. In what year did Tracy Emin win the Turner prize?
She's never won it.
2. When did Damien Hirst's shark in formaldehyde win?
It was cows not a shark.
3. What long journey performance won in 2005?
Shedboatshed, sailed down the Rhine.
4. Which famous film actor won?
Steve McQueen (not really)
5. Who won in 1990?
No one, the prize was suspended.
6. Who has won it twice?
Gilbery and George!