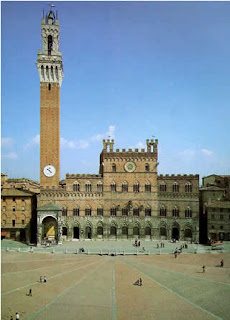 Good to see an exhibition based on a city rather than the usual artist or vaguely populist theme like ‘Gods and heroes’. The relationship between art and a city is as explicit here as it is with, say Pop art and or and Canaletto. Once visited creates a permanent image in your mind – the Campo, the soft brown and ochre stone, the sheer audacity of such a space in the centre of a city. Ravished by the plague it never really gave and a run for their money, but it could have been different. Its art played a significant role in shaping the Renaissance. This was, in part, due to pride. Much of what we see here was commissioned by the local authorities, even the covers of the council accounts were works of art!

Their local heroes were a pope, a preacher a couple of saints and more than a few talented painters and sculptors. They even succeeded in securing a transfer for Donatello from the team.

The early images of Saint Bernardino show that bouts of religious fervour gave such preachers huge celebrity fame. It was obvious from these few images in the first room that he was quite a performer, all passion, hand gestures and icons. Saint Catherine of also features as a life size wooden statue in this first room.

Based on a formidable tradition of fine painting from Duccio, Lorenszetti and Martini, the second room has the huge altarpiece by Matteo di Giovanni (1428-1495). The Virgin features strongly here.but the quality of the works didn’t warrant the hype. In the next room we have the Donatello door panel – stands out as soon as you enter the room. In heroes and heroines we have the bizarre story of Griselda, who is publicly stripped and humiliated by her husband who forced her to prepare for his second wedding.

The panels showing Alexander and other heroes are the highlight and I found my attention dipping in the subsequent rooms, especially Beccafumi (1484-1551). Once again the annoying lack of space and seating makes such exhibitions an ordeal.