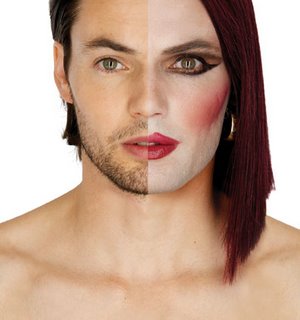 Two titles
I didn’t know what to make of the only Shakespeare play with two titles (Twelfth Night or As You Will). It wasn’t until it was over that it made sense. The play is all pairs, twins, crosses, collisions, reversals and double entendres. This was an all male production so we had a male actor playing a woman who is in love with a male actor playing a woman pretending to be a man who he confuses with another male actor paying the aforesaid woman’s twin brother. As You Will

As You Will addresses me the viewer. It has another meaning as the word ‘will’, has some sexual potency in Shakespeare. But it also his name and this play, I think, is much more deeply personal that is normally imagined.

Twins
I am the father of twins but only discovered that Shakespeare had a twin boy and girl, Hamnet and Judith, in the programme, minutes before the performance started. I was disorientated by this and totally shaken when I further read that the boy, Hamnet, died, probably from the plague, when he was only 11 in 1596, four to five years prior to the writing of this play.

It’s hard to explain the relationship between twins unless you’ve caught glimpses of their invisible psychological safety ropes. It reveals itself in the most bittersweet way when one gets ill, is bullied at school, gets lost in the street or is separated for the first time. They feel injustice, pain and loss in a special way. The involuntary tenderness they have for each other is often just glimpsed in the emotion turmoil or trauma.

What it must have been like when Hamnet died is beyond my imagination. The grief of the surviving twin must have be unbelievably intense, compounded in the parents, who on top of their loss must have felt pain for the remaining child. This extreme trauma must have effected his writing, something I was about to experience.

There is the obvious similarity with the name Hamlet and in Joyce’s ‘Ulysses’ Stephen Daedalus states that Hamlet is, in fact Hamnet,

“Is it possible that that player Shakespeare, a ghost by absence, and in the vesture of buried Denmark, a ghost by death, speaking his own words to his own son's name (had Hamnet Shakespeare lived he would have been prince Hamlet's twin) is it possible, I want to know, or probable that he did not draw or foresee the logical conclusion of those premises: you are the dispossessed son: I am the murdered father: your mother is the guilty queen. Ann Shakespeare, born Hathaway?…. Hamlet, the black prince, is Hamnet Shakespeare.”

Perhaps, but it is clear that Sebastian and Viola are written with parental love, and must surely be, to a degree, Hamnet and Judith. Judith

The opening scene deals with the loss of a brother:

A brother's dead love, which she would keep fresh

And lasting in her sad remembrance.

In scene 2 Viola finds herself in a strange country having lost her twin brother, who is now in heaven:

“My brother he is in Elysium.”

The play was first performed at Middle Temple Hall, London during the Twelfth Night celebrations of 1602 at the culmination of the celebrations, which was then at Candelmas, February 2. Hamnet and Judith Shakespeare were baptised on February 2nd 1585 and although we don’t know the date of their birth, the 6th January (Twelfth Night) is possible.

Far from being a simple, and crude, plot boiler, the ‘twin’ theme must have been so close to Shakespeare that it hurt. Although written as a comedy this play goes beyond simple comedy into other more frightening and tragic territory. Twins, for Shakespeare, personally embody extreme joy and extreme tragedy. This play is a monument to this personal joy combined with the emotional abyss of a child’s needless death. In it he reunites his twins who have both found love and joy in life. It is, perhaps, a therapeutic exercise.

Filthy Shakespeare
The audience had a large number of young people, some clearly from schools but others as couples. This was pleasing. Not everyone in Generation X is chugging back alcohol or addicted to the Xbox.

I have just finished Filthy Shakespeare by Pauline Kiernan and was amazed at how easy it is to miss the sheer pronographics nature of the material.

This performance had Maria thrust Sir Andrew’s hand into her crotch in the following exchange:

Marry, but you shall have; and here's my hand.

Now, sir, 'thought is free:' I pray you, bring your hand to the buttery-bar and let it drink.

Malvolio, the play’s puritan boor, is duped into spelling out the word CUNT on stage, an awkward moment for teachers and GSCE pupils in the audience.

By my life, this is my lady's hand these be her very C's, her U's and her T's and thus makes she her great P's. It is, in contempt of question, her hand.

The play’s full of drunkenness, lechery and trickery.

Duped
The play ends with an astonishingly cruel and bitter scene as the isolated and abused Malvolio promises revenge on all of us – and he means the players and audience. Molvolio has been the butt of or jokes and in this performance his butt literally hangs out over the top of his yellow breeches but he fights back. We’ve laughed and wondered at the tale but we’re left rather stunned by his promise of revenge. What have we done. This is a promise that comes from nowhere, full of venom and bite. It literally stuns the audience into silence. Life is full of promises, illusion and reversals of fortune, but in the end our entertainment is always at someone else’s expense. Malvolio has the last word, as did the Puritans when they closed the theatres in 1642. What an exhilarating night.