Schizophrenic
This was a schizophrenic experience. Hockney's explicit homosexuality, urbanity and LA sunshine still startles a conservative Britain and picture in these areas remain his best work. I also like the intimate images of his mother and father. My Parents is touching. Mr and mrs Clark with Percy is just fine.

However, the photography and later portraits fail to deliver. The curator drawings are of real interest as part of his quest for exposing the use of optical devices in art, but in themselves of no artistic interest. I have to say that this bo 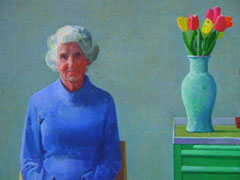 ok fascinated me and I went back to the National Gallery to checlk out his theories about Holbein, Campin, van Eyck, Carravagio, Velasquez, honthorst, Rambrandt, Ingres, and Vermeer. His arguments are very convincing.

From early 15th century many Western artists used optics. Is this cheating - not so says Hockney. The artist still makes the mark and drawing is still as difficult.

Visual clues include:
Some examples are:

The Abassadors - Holbein. We have the distorted skulls and amazing detail on cabinet.

Merchant in Berlin - Holbein
I was to see this Holbein image in berln some months later. It is astonishing to see the obvious error in real life. the bottom right hand corner literally fal;ls away in an attempt to get the pot of money seen ( at a different perspective).

Arnolfini Wedding
Convex mirror and chandelier seen front on and not from below as expected.