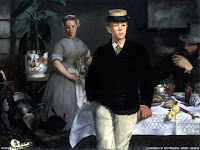 Standing in a long queue, outside in a chilling wind, you’re assailed by a posh girl with a clip-board telling you that, “You can skip the queue and get in straight away of you sign up to become a member”. This will cost a cool £140 per year! Inside you’re asked to gift another couple of quid on top of your £15. (I think, maybe I should have ordered online – but that’s another £1.50.) You’re then assailed by an Italian girl at the door to hire an audio guide. By this time Maney has morphed to Money and I’m in a more critical mood.
This show is more than a disappointment it’s financial fraud. By fraud, I mean that pictures that should be here are not and pictures that shouldn’t be here are. Eva Gonzalez and many others are quite simply, second division. The fact that some have never been shown in galleries is no accident – they didn’t deserve to be shown.

The Luncheon is a high spot with its shadowy father and arrogant youth. Music in the Tuileries Gardens breaks all the rules but where’s the Bar at the Folies Berger? At the Courtauld in London. Olympia? Dejeuner sur I’herbe? Without any of these it’s a crown without jewels. In the end, it’s a fairly mundane meander  through league division two and three paintings. Manet for money. Rather than one of those perspex bozes for donations, I think the RA should offer refunds.