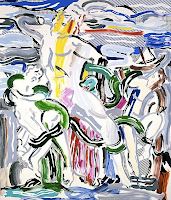 Now this was fun. Not chuckle fun but wry smile fun. Before this show I saw Litchenstein as Mr Pop Art, proud of simplicity, surface and comic print palettes. What I found was a bit of a joker – someone who was constantly subverting the history of art. Mondrian, Picasso, Monet, Judd they all and many more get it in the neck. A huge Lacoon, that looks nothing like a Litchenstein is all wild brush strokes and movement. The Tate guide explains that the snakes were sent by Apollo but he’s wrong. Ken and I both agree that Lacoon was a Trojan and that Apollo was on their side. Indeed, the Greeks despoiled the temple of Apollo in the war. It was Poseidon. In any case, it’s a fantastic snub to the classical tradition. All Dionysian swirls. Here’s another surprise – the Chinese landscapes. Again, he subverts the print form with deliberately vandalism – rough brush strokes. His provocative images of women are designed to elicit superficial feminist critiques but are the very opposite. It’s not often that an art show subverts your expectations but this is one that inverts expectations. Thanks God for American art.