The Hunt – for me, film of the year 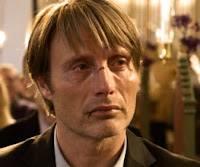 Mads Mikkelson (won best actor award for this at Cannes) has a face that’s half handsome, half ogre. You spend a lot of time looking at this face but it’s impenetrable. Behind it, however, is suffering. It starts with the suffering of separation from his wife but soon descends into something far more sinister.
Community
We’re in the age of ‘community’, that all-too-easy, empty, utopian word. But a community can be a brutal, bear trap, ready to devour anyone who’s different. The Hunt is a brilliant portrait of an ordinary community gone bad. Of course, a community is never a unified thing. It’s a collection of affiliated peer-groups. A child is the spark but the other children, bonded by over-energetic imaginations, provide the accusations. Then the school, with its peer group of teachers (all women) institutionalise these accusations and bring in the parents, a peer-group of intense protective, self-interest. Beyond this is his hunting/drinking club, (all men) a predator peer-group, who now see him as prey. Finally, the rest of the townsfolk, who reject him on hearsay.
The rest of the cast are spectacularly ordinary, deliberately so, and that’s what makes the events so brutal. There’s four characters who remain above and outside of all this. First, the school cleaner, an immigrant and outsider, who sees through the cant, but is rejected. His son, remains loyal and his Godfather is smart enough to see through the whole thing. Finally, the dog, free from language and the poison of accusation, but also becomes a victim. There’s redemption here in the form of close, personal relationships, as a protective device.
Hunting
‘Hunting’ is the big metaphor. We hunt in packs, for the fun of it. We join groups who hunt others. At heart we’re all hunters but can easy become the hunted, predators turned prey. As a work of art, this is the equivalent of the Zimbardo experiment, an exploration of the ordinariness of evil, a community and it’s sub-communities, on the hunt. As such, it’s on a par with Arthur Miller’s The Crucible. We’re all capable of this and all, at some time, complicit in groupthink.
Production
Finally, some praise for the Director and production values, and I use the word ‘values’ carefully. Its low key realism is free from gloss. This is real life and life needs the harsh eye of the pure lens, not post-production trickery. There’s no a twee shot in the whole film. It’s as hard as a shard of Scandinavian lake ice with not a hint of romanticism.
The End – or maybe not
And no easy ending. Formally it’s a tragedy and avoids the idea that narratives need to resolve things. That’s why the ending is a masterstroke. In every community the touch of collective evil carries on from generation to generation – it’s always there. For me, the film of the year.