Scottish Colourists, it sounds suspicious and it is. Peploe certainly created coloured canvases, most of which are derivative of the French artists he so admired, the impressionists through to Cezanne. His output lunches from one French style to another, even down to the Japonoise props, oranges, apples and flat colours. Was he anything more than a painter of suburban canvases to brighten up the drawing rooms of the wives of Edinburgh bankers and lawyers? Scotland can be a dreich place and a splash of colour always goes down well above the mantelpiece.

This is a man who makes Kirkcudbright (a place he painted but hated) look like Cannes and Iona like Ionia. There’s nothing of the Scottish light, the rock and the relentless weather. It’s largely hot, Mediterranean colours. In the last room there’s two canvases, side by side, of trees, one from Antibes the other from the Scottish Highlands but you’d struggle to tell the difference. 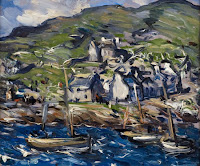 There’s glimpses of hope, like the small oil of Barra in a storm, where even the houses are bent to the wind, and the early still lives, with their creamy tables cloths and black abandoned rooms tied together with a bottle or coffee pot (early picture).

Unlike his contemporary Charles Rennie Macintosh, who managed to take the same influences and create a unique world of beauty, that has grown in stature, Peploe's work didn’t mature with age. He has become resolutely suburban but perhaps a symbol for a nation, with a paucity of great art, desperate to find some heroes.