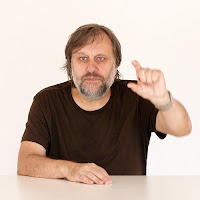 Profligate in print but his works are largely esoteric, often opaque and many unread by all but the expert in philosophy. Live on ouTube, however, he speaks like Socrates, straight from the lip/hip. Like Socrates he’s a bulky, bearded man, oblivious to fashion and self-grooming, then there’s the lisp and lots of fidgety ticks. You can’t keep your eyes off him as he’s always the most articulate buffoon in the room.
Above all, he has a domineering style, spitting out metaphors, anecdotes and quotes. Once you’ve seen him a few  you realise that he’s a crowd pleaser, a sort of intellectual ‘stand-up’, who has a stock of jokes and recycles them in live shows. Unfortunately, if you play this game on YouTube, as he does, you suffer a slow death through exposure. Your little scripts and internal narratives are seen as gags. You become the ‘emperor with no clothes’ one of his favourite analogies. His performance with Tsiprasin Athens was masterful, keeping the debate away from the reality of real economics, real debts, real taxes and reality itself, with a string of jokes and metaphors. The two main parties are Pepsi and Coke, Tom & Jerry cartoon. He also used his overused coffee/cream film snippet, where he invokes a dialectical double negation. He claims that the double negation of what is said should be taken with what is also not said. This is just a string of rhetorical jokes.
As a film critic he is more than a critic, he is a film theorist. It is not his job to provide reviews, he brings intelligence, political analysis above all, and insight and intelligence to this important medium. His critique, not review, of The King’s Speech as a deeply reactionary film is magnificent. It’s a film about a man who is intelligent enough to be nervous about the whole King thing, but is made stupid enough by his Australian coach to see himself as a King. Now that’s a ‘critique’ not the mere work of a critic.
As a philosopher, however, he’s of no real significance, his head stuck in Hegel and an obsession with the remnants of Lacanian psychoanalysis and Marxism. Hegel accidentally fostered the obsession with dialectics, warped dialectically into dialectical materialism by Marx and Lenin. Throw another false split between the ‘conscious and un-conscious’ of Freud and you’re forever stuck in throwback theory. He likes to use the three pronged trident of Hegel, Marx and Lacan, but ends up pushing concepts around the plate with nothing more than a blunt fork.
The left does has neither a leader nor theorist in Zizek, as he’s too esoteric or too much of a showman to be practically useful. It’s the old oppressors versus the oppressed, rather than the subtler and practical work of Althusser and Gramsci. And if the riposte is the usual ‘live with the contradictions of ideology’, then this is very old Marxism dressed up as rhetoric.