http://www.blogger.com/template-edit.g?blogID=27684744 ARTYFACTS: Manuscripts exhibition – what they don't tell you - a tale of Royal and religious censorship (British Library exhibition) 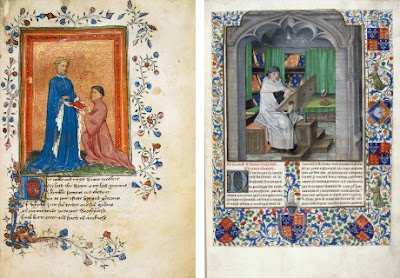 If you like books you’ll love this exhibition, but be warned, you’ll need a couple of hours or more to do it justice. 150 manuscripts (literally meaning written by hand) are laid out (a bit confusingly at times). It helps to know your Kings and Queens as the theme is Royalty. This, in fact, limits the scope and honesty of the exhibition but don’t let that put you off.
You get to feel a sheet of parchment and vellum as you enter. Do you know the difference? Paper only became common in the 1400s. At three to four pages per day and even the best scribe making a mistake per page (erased by scraping with knife or pumice stone) this was painstaking work but it’s the illuminations that took the real artistry, time and effort.
The collections, largely put together by Edward IV and Henry VIII that form most of the show. They allow you to lean on the glass cases and you’ll need to, as many of the illuminations are small and repay detailed attention. We must remember that books like this were rare, even in Medieval times. Incredibly expensive to produce, they were owned treasured and treasured by the elite. Indeed, the show is anchored in Monarchy, lineage, the divine right of Kings, their education, relation to religion and chivalry. They literally embed their coats of arms, even their own images, into the books.
What they don’t tell you
Print is power and therefore politics, so a book is never just a book, it’s a device for flattery, preferment, a claim to legitimacy, a contract, a confirmation of status….. In fact, something they don’t tell you here, in the already annoying Jubilee year, is that Henry VIII was a censor who tried to ban reading, even of the Bible, by apprentices and women. Elizabeth I did the same through The Stationer’s Company. So Royalty, far from being bibliophiles promoting reading and writing, were narcissistic owners and censors. One could hardly call the present Royal family readers and intellectuals. Bibliophiles they are not. I have never heard s single one of them utter anything remotely interesting. Did you know that the Royal family have an absolute exemption from the Freedom of Information Act? This law was passed in 2011. Rather than playing an impartial role, they are free to be as partial as they want – as we know from the shenanigans of Andrew and Charles.
Royal and religious dogma
The degree to which books were merely objects of Royal or religious dogma is the real lesson here. We really do see that Gutenberg, and Caxton, truly revolutionised the replication and scalability of the writing and reading of books. Remember that the Catholic Church still had a prohibited books list until 1966. To be clear, the list included;  Jean Paul Sartre, Simone de Beauvoir, Voltaire, Denis Diderot, Victor Hugo, Jean-Jacques Rousseau, André Gide, Immanuel Kant, David Hume, René Descartes, Francis Bacon, John Milton, John Locke, Galileo Galileo and Blaise Pascal. Giordano Bruno was burnt at the stake for his writings. So Royal and Religious control actually meant censorship.
Conclusion
Nevertheless, these are magnificent books that give us a direct causal link with the past. There’s even annotations in Henry VIIIs own hand in the margins. The Mathew Paris 13th C journey to the Holy Land is an intriguing strip map, as he certainly never did the journey himself. You can wallow in the few books that did exist over these many centuries but don’t fall for this being in any way a golden age for books.