Hagiography of the Hajj? (British Museum) 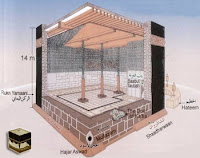 My friend Frank Gormley, although non-religious, was fascinated by pilgrimage and did the St James way to Santiago Compostela and several other routes. He saw them as routes for reflection. The Hajj intrigues, not least because it’s closed to non-believers. The British Museum therefore take you on the journey, as if you were doing it for real.
Several journeys
The Hajj is several journeys. A physical journey to the place you have prayed towards, for the whole of your life – Mecca; a spiritual journey where you reflect on your own moral behaviour and values; a journey in time back to the age of Mohammed and Abraham, to the roots of revelation through the prophets; a communal journey as most pilgrims travel in a mutually supporting group; a transformative journey, as the experience is often a turning point in the pilgrim’s life. It’s many intertwined journeys.
Getting there
On a huge map we see how Muslims got to Medina and Mecca. The journeys across North Africa across the Sahara were demanding, as were those across the Arabian desert (900 miles) and the ocean from the Far East and India. The routes were hard and hazardous with the dangers of hunger, thirst, robbery and destitution. Some early travel books are exhibited along with some curious infidels, who sneaked in.
There’s an illustrated manuscript with a dialogue between a pilgrim on a camel and one on foot. The camel mounted man dismisses those who walk but the walker castigates him, as he sees the camel and not the man doing the Hajj. The point is that the journey is part of the experience – to travel is as important as to arrive. In 1932 there were only 20,000 pilgrims, in 2011, 3 million, most of who travel by plane. You can’t help but think that a ‘package by plane’ or 'holiday Hajj' is a vastly diminished experience.
Being there
Let’s see if I can remember the rituals. You start by donning a simple two-piece white gown, then 7 anti-clockwise walks round the Ka’ba, try to kiss the black stone in the corner (supposedly a white stone from paradise turned black by man’s sin), drink from the Zaman Well, run to Mina, camp for a night on the Plain of Arafat, throw 49 pebbles at 3 pillars, then ritually shave your hair, wash or buy a token for a sacrificed animal to feed the poor. Repeat the pebble stoning then say goodbye. It takes five or six days. The pictures and videos show real passion and emotion, with many in tears and this is what raises the experience to more than an exhibition. You can't help but be touched by proxy. I particularly liked the audio recordings of people who had completed the Hajj. Whatever my thoughts, it’s their thing and most seem to have been both moved and changed by the experience. But I wanted to ask if they really did believe that Adam built the first church on the Ka’ba site, that the black stone really did come from Paradise, that the Koran really is the ‘word of God’? In the end religious practice that pretends to be the rock of ages, for me founders on the rock of incredulity.
Too reverential
I also found it odd that there was no reference (maybe I missed it) to the many stampedes, crushes and gun battles that have taken place at the Hajj. Over 360 died in 2006, 251 trampled to death in 2004, 14 crushed to death in 2003, 35 die in a stampede in 2001: 251 trampled to death in 2001, 118 trampled to death in 1998, 343 pilgrims died and 1,500 injured in fire in 1997, 270 killed in stampede in 1994, 1,426 pilgrims killed in tunnel leading to holy sites in 1990, 400 died as Saudi authorities confronted pro-Iranian demonstration in 1987. If God is in the house, then he has some explaining to do. Could it be the Saudi support for the show that prevents this level of objectivity and honesty? This is an absolute monarchy with dubious political/theological reach (Wahabbism), tens of thousands of political prisoners and astronomical levels of corruption and moral duplicity. The British Museum should be above this sort of hagiography of the Hajj.