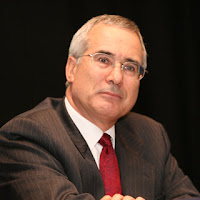 Cool, calm and certain; Stern delivered on the, science, economics and politics of climate change. Hope you’ve all read the report (700 pages). It’s just damn fine to see someone soaked in the science, deliver a talk that cuts to the beating heart of the matter. He sees it as a risk management problem and that the risks are ENORMOUS i.e. a 50/50 chance that we’ll see temperatures 4/5/6 degrees hotter, temperatures the Earth hasn’t seen for 30 million years, something that lies outside of human experience. Consequences; Bangladesh and Florida among and many more under water, Southern Europe as hot as the Sahara desert, mosquitoes and malaria in major African cities, tundra melting and methane release, all leading to the migration of billions of people and on-going resource wars.

He pulled in evolutionary cognition as the explanation for our short-termism. Note that the election has barely mentioned climate change. We’re hopeless at dealing with 30-50 year problems, as our political systems cater for short-term goals. But, as Groucho Marx said, “Why should I care bout future generations, what have future generations ever done for me?” The point is that politicians have to start dealing with probabilities, not certainties.

He had some praise for China, who he thought was one of the few nations capable of taking the long view. Their 12th five year plan is vital for the success of the Copenhagen Accord. He has grown more optimistic that Copenhagen will work, with 100 countries signed up and other conferences planned in Cancun and s Africa. At just 2.5 pages and 12 paragraphs, it’s a start, with a 100 billion promise for poorer countries.

Do we need a disaster to waken the consciousness of mankind? The Australian bush fires have altered opinion in that country, so there’s something in that hypothesis. Are fossil fuels becoming so unaffordable that the boat will self-right? In the end he had a rather surprising saviour here – business. It was here that he saw lots of immediate activity and saw the pension funds as the key to green investment, as they take the long term view. The pace of innovation, he thought, was immense and investors, he thought, would start to shun high carbon investments. Unfortunately, it was the US and China that most of these opportunities are coming from. Entrepreneurship is key.

I spoke to Nick Stern afterwards, and asked a question, “Lovelock was here in this very room two years ago, and would describe himself as a realistic pessimist, what probability do you attach to his catastrophic outcome?” Stern replied, “Of course, he’s really more into the science than the economics, but there is a probability.” He wouldn’t give me a number. That’s the problem with economists, they’ll only tell you the probabilities of their favoured outcome!