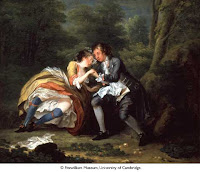 Hogarth the secret eroticist
Was Hogarth the moraliser really peddling erotica to 17th century London audience? Look at this post-coital image and try to convince yourself that he wanted us to be angry about sex.

Artist with an aesthetic
Hogarth is a satirist first, painter second. Armed with this fact you can skip rooms 4, 7, 9 and much of10. His portraits, whether they are of individuals or families, are poorly executed. If this were an exhibition of Hogarth’s portraits, no one would come. So what are we to make of it?

Aesthetic of the S-shape
Hogarth does have a clear aesthetic and Room 1 has a copy of The Analysis of Beauty, a work in which he exalted the s-shape as the Line of Beauty. Through this core aesthetic he wanted to “fix the fluctuations of taste” and enterprise taken up by later enthusiasts of ‘significant form’ like Clive Bell. We also had an explanation of Hogarth’s love of character, not caricature. The dance print explains his theory perfectly, contrasting the elegant sinuous dancers with the clumsy movers. He placed his Line of beauty in his self-portrait a line on his palette. This was a good introduction.

Arch-moaner
Room2 has a satire of the south sea bubble with poetry beneath the image. This really is the cartoon of the future and the first thing that has to be said about Hogarth is that he was the progenitor of the comic strip.

I did start to worry when his rant against masquerades and opera contained two lecherometers (thermometers of lechery). Hogarth is profoundly moralistic. He’s the ultimate English moaner. People today – too much sex, gambling, crime, theatre, teenage pregnancy, materialism – you name it h

e’s against it. The English love Hogarth because he’s a surrogate moaner.

The Lottery shows the weakness of his approach – prints crammed with allegorical figures. Crowded and confused, like a piece of theatre with every actor on the stage at once.

Bizarre
However, very occasionally, Hogarth surprises with a completely absurd image. In this room we have Mary Tofts giving birth to rabbits – which turned out to be an elaborate hoax (were they really that gullible in the 17th century?). We have Gulliver being given an enema by the Lilliputians with a couple of monks fondling each other in the garden. In his Mystery of masonry, he shows an apprentice mason kissing the pox-marked cheeks of an old woman.

History
Some paintings, such as that of Falstaff, Garrick and The beggar’s Opera are of historical interest. It is strange to see wealthy theatre attendees sit on the stage to watch the play.

Humourless harlots
Whoring abounds in this room with two of Hogarth’s most famous series of paintings. I hesitate to call them comic strips because they are totally devoid of humour. The original paintings for The Harlot’s Progress have been lost but these prints do show that Hogarth may have achieved the opposite of his intended effect by over-moralising.

Unintended outcomes
By presenting images which show men fondling themselves, exposed breasts and implied sins of every description, he may have been creating erotica rather than enlightenment. This unintended (maybe) effect us at its strongest in the before and after sex paintings, where the women is sitting, legs akimbo in a post-coital flush. It could have been painted by Boucher.

More sermons
A Rakes’s Progress in displaying a life of reckless gambling and whoring may have titillated rather than enraged its viewers.

Four times a day, in Room 5 is a more sober treatment of streetlife in London and Room 6 has Marriage a la mode, perhaps the best of his serial works, showing a marriage descend into depravity.

Industry and idleness – the title of Room 8 says it all, another piece of comparative good and evil moralising. There’s no subtlety, no realism and therefore nothing to be learnt from these exaggerated tales.

The four stages of cruelty puzzled me, as Hogarth is often portrayed as exposing the depths of the English character. Here, however, we have horrific scenes of cruelty to people and animals. The prints of famous London criminals did show that the English romanticised criminals even then.

Lastly we have The Election. By this time I felt like a non-believer at the end of a very long sermon. I had to amuse myself by looking for details and thinking beyond the paintings to 17th century life without its Hogarthian exaggerations.

Not really a satirist
On the whole, however, everything is so obviously planned and painted. These are lectures – all tell and no show. He is not really a satirist, as that requires wit, and Hogarth has an underdeveloped sense of humour. The exhibition says more about the limitations than heights of English art. With Hogarth, Stubbs, Reynolds and Gainsborough we had provincial art which failed to move beyond its localised function. With Hogarth everything is too obvious and hyperbolic. Everything here has the repulsive smugness of the preacher.