Citizens and Kings - The Royal Academy 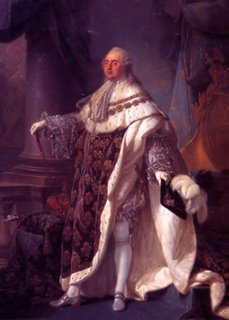 Citizens and Kings
This is the wrong title. The Age of Enlightenment wasn’t about these two polarised groups, although I realise the pulling power of the word ‘Kings’ for the ‘National Trust Member’ portion of the audience. In any case it’s downright sexist - ‘Catherine II’ wasn’t a king!

Let’s start at the end. I wasn’t as bowled over as the critics on this one. The enlightenment was in no way led by the visual arts and these paintings do not really offer any profound idea of the interplay between the visual arts and what was happening in the 18th century. The ‘room’ themes are sometimes forced and one does not emerge feeling enlightened about the enlightenment.

Room 1 – ‘Rulers’ or ‘the unenlightened’
Good to get this lot out of the way. George IV, by Sploshua Reynolds, an overweight hedonist. Louis XVI all arrogance and fat lips, a stupid man who was caught while fleeing the revolution when he paid for some food in a store using a coin with his own head on it – guillotined in 1793! The bust of Marie Antoinette also showed an ugly image far from the Hollywood ideal. Catherine II, also truly ugly, and the corpulent George III. What a sorry lot. Napoleon, however, is altogether different, if more offensive in his imperial pose. The Pope, both marble bust and painting looked world-weary but smart.

Room 2 – The Status Portrait
Bit of a mixed bag with everyone from Benjamin Franklin to obscure Scottish military figures (Hugh Montgomerie poses while his troops slaughter Cherokee Indians in the background). Napoleon is, again, the main feature with his globe, papers, books and clock showing he’s been working all night.

Room 3 – The Cultural Portrait
Now we see the true heroes of the enlightenment, Hume, Rousseau, Voltaire, Hutton, Buffon and Banks. This should have been the centrepiece of the exhibition and more paintings in this area would have been welcome. We see here how portraiture, in fact, reveals little about the intellectual forces at work in this period. Hume looks empty and posed, the opposite of his character and writings. Hutton, is a poor work with some awful fossil props, badly painted. One would never guess that he would lay the foundations for Darwin’s theories. Similarly with Banks and Voltaire and Rousseau. There is no sense of intellectual fire in these works, yet their written works are ablaze with ideas.

Room 4 – The Artist: Image and Self-image
Introspective and dull works.

Room 5 – The Portrait after the Antique
The maste

rpiece of the show is here – David’s Death of Marat. The moment of death amplified by the limited palette, paired good and evil of the pen and knife, the simple table/tombstone/coffin and the black empty space above the body. Apparently, the body was a bit of a mess and David had to have the ligament to his tongue cut to prevent the tongue from sticking out of his mouth. His arm had rigor mortis and had to be cut off and replaced by one from another corpse. Everything about this picture speaks of the shift in world view. The naked Voltaire is just as shocking with his sagging skin and skinny limbs. It was, of course, his mind that mattered.

Room 6 – The Family Portrait
My heart sinks when I enter a room full of Gainsboroughs and Reynolds. No wonder the Louvre held out against having an English painting section for so long – it can be so dull.

Room 7 – The Allegorical Portrait
The Reynolds Mrs Siddons as Tragic Muse is as ridiculous a picture as you’ll ever see and the actor Kemble as Coriolanus - well, I was pleased to exit the room.

Room 8 – Nature and Grace
The show was staring to struggle here. I found its links with the enlightenment spare.

Room 9 – Romanticism and Realism
There is an outstanding portrait of the editor and publisher Bertin by Ingres which amounts to more than all of the other paintings in the room.

The selection of postcards said it all – only the dumpy kings/queens and twee ‘stick them on the fridge door’ images were available. The 17th century was a far richer tapestry than this show would suggest and the art of the enlightenment is left floundering in the wake of the printed word.