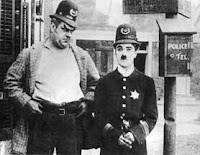 Show don’t tell
Three Chaplin films with the London Sinfonietta. Unfortunately, I had the wrong seat for this event. My view of the film was obscured by the orchestra, and soprano, who stood up several times to block the screen. I would have preferred to have been in the circle as the orchestra played, not a traditional film track, but a dissonant score, one full of percussion noises. This was brave and, to be honest, why have a live orchestra just to play a simple score. However, I did find the soprano and baritone surplus to requirements. There is no need to sing narrated words to a silent film. It was designed to work as silent comedy and the words were merely a distraction.

The overall problem with live music at a film is the fact that music should complement and underscore a film. When it dominates, as it sometimes did in this performance, the viewer/listener gets cognitive dissonance. You bounce between watching the live orchestra and watching the film. The experience falls between the two.

Movies
The three films, all shot in 1917, show how Chaplin progressed in terms of script, special effects and ambition. Poverty, violence, love, abandonment and humanity are all dealt with in these three comedies; Easy Street, The Immigrant and The Adventurer. Chaplin knew much about these themes and was to suffer abandonment at the hands of the FBI in the US and was banned from re-entering the US from 1952 until he won his Oscar in 1972.

Amazing Tragedy of Eric Campbell
I did love Chaplin's huge and wonderful sidekick Scot, Eric Campbell. His is a tragic story. In the year all of these films were made, 1917, July 9 his wife died of a heart attack at a restaurant near their home. Shortly afterwards, his daughter Una was seriously injured after being hit by a car while walking to a store to purchase a mourning dress. Only two months later, Eric met the gold-digging Pearl Gilman, a vudeville comedienne, while at a party. Despite her reputation for marrying and divorcing famous men, they were married only five days later. In November of that same year, she filed for divorce. On December 20th of that year, returning home from a party, Eric Campbell was killed in an automobile accident. He was cremated, and his ashes remained in a closet first at the mortuary and later at a cemetary, since no one paid the funeral bill. Finally in 1952, an office worker at the Rosedale Cemetary arranged for burial of Eric Campbell's ashes. There is no record of the location of his final resting place.