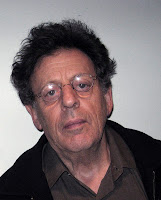 Koyaanisqatsi is a Hopi word meaning ‘life imbalance’. I had just attended a workshop on that remarkable building, the Dome, and had what I regard as the best seat, visually an acoustically, in the house - A39 – bang in the middle in the Circle. This really is a great venue, although you can’t see the Dome from either the outside or inside, it’s a huge octagonal domed edifice, originally a stable for the Prince Regent, then a barracks, then a hospital for Indian soldiers wounded in the first world war.

Anyway, back to the performance. Philip Glass was there along with an ensemble that played his score top the movie live. It’s largely time lapse or slowed down, so that the music sets the real tempo. It starts and finishes with beautiful Hopi rock paintings, but it’s opening sequences are huge panoramas of the US landscape devoid of people or signs of habitation and rolling clouds and rivers. But not for long, as the Saturn rocket looms into view and huge trucks and cranes extracting minerals. Cityscapes and people soon appear, along with huge housing projects, demolitions and poverty. It’s nothing but ambitious this film. The problem is that the visual and musical narrative isn’t quite sophisticated enough. The clever juxtapositions aren’t there and although most of the scenes are truly beautiful, the speeded up cars on roads and people on escalators have since become clichés.

For me the landscapes were transcendent and the shots of the hydrogen bomb tests as frightening as they’ve always been. We never see these images now, except trivialised in pop videos. They’re far more frightening than any horror movie.

One aspect of the film that limits its scope is that it is essentially an American movie with nothing but American images. This reduces its universality somewhat. Nevertheless, it’s visually stunning.

"If we dig precious things from the land, we will invite disaster." "Near the day of Purification, there will be cobwebs spun back and forth in the sky." "A container of ashes might one day be thrown from the sky, which could burn the land and boil the oceans." You’ve got to take these things with a pinch of salt as they have an oral tradition, altered by the Spanish and later cultures. Curiously, the Hopi now make most of their money from opencast coal mining!

I saw this film many years ago and was very impressed. However, everythign else I have ever heard by Glass has sounded dire to me.

Such a great article it was which Philip Glass was there along with an ensemble that played his score top the movie live. It’s largely time lapse or slowed down, so that the music sets the real tempo.In which he Dome, and had what I regard as the best seat, visually an acoustically, in the house - A39 – bang in the middle in the Circle. Thanks a lot for posting.