Inception - is it for real?

A dream within a dream is an Edgar Allen Poe poem with the famous line, ‘Is all that we see or seem but a dream within a dream?’ and Shakespeare was doing it 400 years ago. Movies have used the ‘dream theme’ often enough, especially as an opening gambit or play within a play, then cut to with the character wakening up or the word ‘CUT’ as we pan back to show that the scene was being filmed for a movie. Nested dreams have been used in Nightmare on Elm Street and An American Werewolf in London. But it was in The Matrix that the nested dreams/reality theme became the main plot context. In Inception, it’s taken to whole new level, or levels.

Christopher Nolan wrote the script and so the dream levels are written to be filmed and the dimension of time captured through cutting. Each dream-level has its own unique aesthetic. Note that each level gets more abstract, cleaner and brighter. Clever cinematic, art direction. 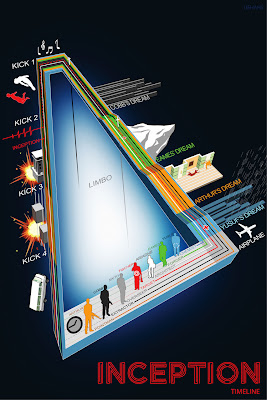 First Class cabin in a 747, the most perfectly controlled and disengaged from reality environment than man knows, a tiny capsule of luxury moving at over 500 mph at 35,000 feet above the earth. This is the pinnacle of Nolan’s dream structure pyramid and already plays with the reality theme.

Level 2 – A classic gritty blue/grey NY car chase look and feel, with fast cuts, crashes, shoot-outs and bridge scene. We cut from tight car/taxi/van interiors to street exteriors and the wonderful idea of a freight train ploughing through it all from the unconscious of the dreamer.

Level 3 – A warm, classy, cream/brown claustrophobic hotel interior, all smart bars, rooms, and corridors with dim lights and lifts. We’re meant to feel a little uneasy in this world, where we’re never at home, always on the move, in the limbo of hotel-land. This is echoed in Di Caprio’s personal dreamland where his wife takes her suicidal leap.

Level 4 – We’re way out here in a simple, stripped down, bright, white, remote exterior. By shifting to a classic Nordic, cold-war, computer-game inspired, shoot’em up in the snow, with lots of camouflaged soldiers and a slightly unreal fortress/hospital, Nolan gives us a world that seems a bit unreal but slams into us with its guns, grenades and explosions. He’s playing with us here.

Level 5 - Cobb's dreams. These are perhaps not strictly a fifth level. The glacial, coastal, crumbling city is perhaps the most stunning and most dreamlike visual in the whole movie - truly surreal. His other worlds are the most ambiguous and tantalising. We have the tangential test-run aesthetic of Paris, its Hausman streets being folded over like an omelette and café scene exploding all around them. The dreamlike 8mm sequences of his kids and wife's world are much more psychologically sophisticated that the others.

The movie is a Cartesian experiment, what if all we perceive is a dream and that we can dream within a dream, then dream within that dream and so on. Not a new idea but the idea that you control the process to create dreams and steal memories is novel. Indeed, this is a movie that has to be read like a novel, as it makes you think back, reflect and has lots of clever narrative structure and revelations. Dreams, memories and time are all telescoped out and back again with the mind playing spoiler tricks on itself through unconscious desires and real memories. The cleverness of the movie is making each radically different world seem real. To do this, each world needs to be needs to be believable. The real wonder of the movie is the fact that cinema can create so many worlds in one movie and that suspension of disbelief clicks in immediately. The director realy is playing with the audience here and plays his big creator's card at the end.

Falls, the sense of falling which triggers waking, is used as the recovery device. People are tipped off chairs, fall in lifts, fall in vans crashing off bridges and ‘falling’ and gravity are used to question given realities. Another idea brilliantly realised in the movie, as it allows unreal scenes of fights in environments where the physics is changing. Planes, trains and automobiles are all used to literally create environments in which gravity shifts and we can dream being cut off from the normality of the real world. Again the real/unreal theme is explored.

The Freudian concept of the unconscious plays God in creating a dreamworld’s people. They are projections of the dreamers mind and can work with him or against him. These constructs appear in the movie as extras or as a revengeful destructive rioting mob, ambushing gunmen. This sense of shared space but one dreamers world is, perhaps, the most difficult idea to grasp as there’s no evidence that it’s possible and therefore seems illogical.

Repressed memories are stored in safes that have to be unlocked. This is a clever visual device and although a little literal, provides psychological surprises. If this movie has a fault it’s in sticking to conventional Freudian theories or repression, Oedipus complex and the unconscious. They’re taken as givens. I’d have preferred a less romantic and more contemporary interpretation of dreams, perhaps a more honest look at extreme anxiety, sexuality and recurring dreams. But hey, this film has enough on its photographic plate.

Time is logarithmic in nested dreams, so a several second fall of a van telescopes out into minutes and hours elsewhere. To watch this movie you must hold the complex concept of variable time in your mind, corresponding to the different levels. Slow-mo and cuts between the levels do this well. We jump between different dreams and rates of time. That’s clever.

The big theme is not the cod-Feudian psychology but the appearance/reality distinction, an abiding theme in philosophy. There is this strong idea going back to Plato’s cave, our perceived reality a representation of reality, from the pure idealism of Berkeley to the unknowable in Kant. It takes a lot to get a philosophical theme across in film, but Nolan succeeds, albeit at a superficial ‘life’s a dream’ level. But he was brave enough to leave the issue hanging at the end. This is a rarefied theme and if more 12+ viewers are exposed to the ideas, so much the better.

Nolan has been building towards this with Memento, Insomnia, Batman Begins, The Dark Knight. Like computer games, you can die but respawn on waking. And Nolan at 39 really is a Gen X game playing director. Some critics don’t like this aspect of the film, but dreams and much more like computer games than TV or movies. Dreams are often disturbing and not romcom material. Those that complain about the 'computer-game' dimensions 1) exaggerate the role of games in the movie 2) misunderstand his interpretation of the unconscious.

Nolan invites the audience to reflect on whether you the viewer is always dreaming (at least viewing an appeared/represented reality), have just experienced a dreamlike creation through a cinematic projection, have seen the dreams of a Director and his creative team, the dreams of an acted reality, Cobb's dreamworld or the dreamworld of several players. For me, Cobb is dreaming.

Ultimately we have the movie as a dream experience, and when it ends you feel disoriented and just a little bit more sceptical about what you call ‘reality’. Then whole movie collapses into Cobb's solipsistic perspective and that's the beauty of the film. The deep, deep sense. that we're all alone living within our created consciousnesses (and that includes dreams).

Going to see this tonight after reading that, might need a wet towel on my head thought (reference intended)