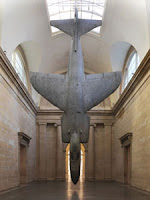 Forget Rude Britannia, go straight to the free show in the foyer. A Harrier hangs like a dead pheasant from the roof by a single cable; dead, inert but absolutely beautiful. The fact that it’s in such a non-functional pose makes it all the more powerful. It hovers tightly in the narrow hall the antithesis of its natural habitat, screaming over the Welsh or Scottish mountains, erect but impotent. Impossibly sleek, part shark, part ray, it's a form shaped by the necessity of overcoming gravity and air resistance. The art of speed.
There were group of kids just staring at it, literally with 'wonder'. It's nose is only a foot or so off the ground so lots lay beneath its nose for camera phone snaps. Remember that this was the plane that could hover – no one quite knew why this mattered, as we had helicopters, but it could. Nose down that's the trick - no one has ever seen it like this as nose down is death,the point just before it's destruction by the earth and gravity it is designed to escape.

The Jaguar further back, lies on its back, still, silent and vulnerable. It’s polished stainless steel body stripped of camouflage, it’s jet engines empty and hollow. This had a different ambiance, that of something shot down, abandoned. The polished steel made you want to touch and stroke the surface. Surely this is a work that would have benefited from allowing us to touch the structure. Most of the kids did, as soon as the official turned her back. Who can blame them. I did the same.

These are outstanding works by an artist with a huge imagination.