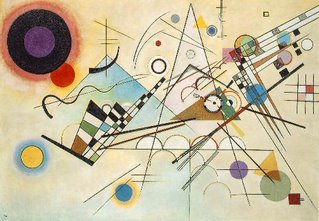 Kandinsky anyone?
Has anyone, ever, been so obsessed with color? Kandisnsky's onbsession became arcane and odd but he sliced colour across the canvas and shaped (and coloured) all that we now see in abstract art.

I haven't seen many Kandisnky reproduced images on people's walls, apart from the grid of targets, popularised by Ikea no less, and why not. Is this because almost every ther image is fractured, tortured and jarring?

Impressions, improvisations and compositions
I lost the plot when it came to impressions, improvisations and compositions. Then again, so did K. He was always trying to template theory on to art, but rarely with any success. It reeks of Platonic forms, denyies representation but doesn't replace it with enough to want to look for very long. It's fractured. Diagonals disturb me.

very nice blog!If you like pretty girls, visit my blog, you have a lot of beautiful girls we havemany friends in exchange